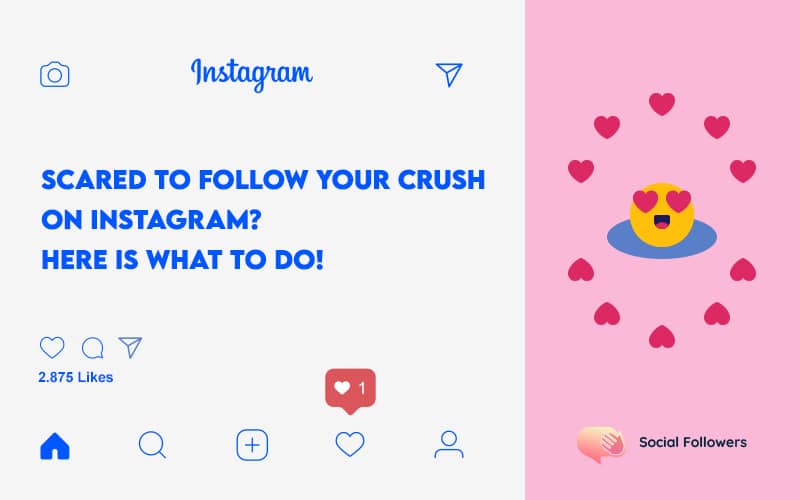 Sometimes, the person we like the most is destined to someone else. It happens!

She was a public figure from the media industry and I had a crush on her with the unlimited feeling of attraction and admiration. She had very sharp features and self-descriptive gestures. Her white complexion was just comparable to the congregation of densely shining stars. Her graces were attractive to the extent enough to take me into the new world where worries were unknown to me and happiness was the most abundant wealth.   Her photogenic face and her confidence while posing for the shoot used to lure my heart. A musical feeling bubbled through my body every time I checked her profile on Instagram. Occasionally, I used to question myself “should I follow my crush on Instagram?” Here are the answers I could give myself in the response of my ignition to hook up with my crush and tell her how she rules my heart!     The purpose of writing this article is to explore various alternatives and views and try to respond to the following interrogations.

Everybody has the right to send friend requests and add others on social media platforms. You can use your right to freedom of expression considering the ethical constraints and limitations. Adding your crush on Instagram and Facebook is good as long as you do not become a headache for others.   Before you add your crush on Instagram, you should comprehend you are going to follow a temptation. Be it a man or a woman, everybody could feel living in a supernatural world that may exist on Instagram only. In reality, your crush may not be one of your acquaintances. Remember at every step that following and stalking on social media are entirely different things!

Check out the profile but avoid stalking your crush

There is a clear difference between ethical following and weird stalking on Instagram. If your crush feels that you are stalking him or her, the consequences might differ from expectations. Checking out the profile of your crush time and again would gather no mass, except it could keep you updated about a bit of what is going on in the life of the person you have a crush on.

You could comment on the posts of your crush independently. In the case of Direct Messages, persist on generalized ones only. If you are a gorgeous looking confident lady following her crush on Instagram, you should primarily think about the following points:     After you grasp the essence of the above questions, you are in a better position to comment on the posts of your crush regularly but in a pleasant way.

Rarely talk to the followers of your crush

Do remember that your crush on Instagram could be liked by many others! Excessive communication with the followers of your crush might create unfavorable situations for you. Nearly, 80 percent of the Instagram users come from outside the United States, but the major portion of these users belongs to Britain. It establishes the concept that you would find most people following your crush from around the world. It is therefore not an impressive idea to friend with most fans of your crush on Instagram.

Adding your crush on Instagram could impact your lifestyle

Pondering upon how to DM a guy on Instagram the whole way long could cause some serious psychological problems. Statistics show that Instagram has the most engaged users with an engagement rate of 5 – 7 percent as compared to Facebook and Twitter which have less engagement rate. This is therefore most likely that prolonged Instagram activity could influence your life in a systematic way. Excess of everything is bad. It is just a valuable proverb.   Currently, 62 percent of the Instagram users view their profiles daily and do one or more of the following activities:     An average user spends around half an hour daily on Instagram. In such a competitive environment, you and your crush seem to be too far from your hands to touch, but you can learn how to stand out on Instagram to prove that you are not too far from your hearts to touch.

How to catch the attention of your crush on Instagram

It requires ample time and a complete understanding of the Instagram profile of your crush. From trivial things to significant ones, you need to be good at making connections and interpreting the timeframe.

Another school of thought: why to avoid adding your crush on Instagram

How would you feel if not followed back by your crush?

Humans are innately prone to get feedback and be noticed. Imagine, you are following your crush since long and have been commenting on his or her posts in a respected way but find no response! Now try to give meaning to your visualized feeling. Your feeling and emotions may take any of these forms if your crush just does not follow you back for long.

Adrian was a 24 years old native of Costa Rica, a country in North America. He was a passionate Instagrammer. Taking mesmerizing photographs and uploading them on Instagram was a routine matter for him. He got a billion-dollar legacy from his father who used to deal in petroleum products in Brazil and Argentina. After the death of Adrian’s father in a gangster attack in Argentina, he shifted to Costa Rica and started living there exploring the world from a different standpoint.   It was in 2017 when he sensed a crush on Elena Mark who was a lawn tennis celebrity in a local Spanish club. Adrian started following Elena on Instagram and used to comment on her stories, posts, videos, and quizzes with an open heart.   For nearly a whole year, Adrian consistently followed her crush on Instagram. During the last week of July 2018, Elena responded to him with the question “Why are you so consistently following me on Instagram?” “I really like you Elena” Adrian replied. He burst into joy and just could not describe how it feels when your crush follows you back on Instagram. He started thinking of how to DM a girl on Instagram to impress her in a more effective way. By now, he had fallen in love with her from head to toe. It was more than a mere crush now!   Unconsciously, Adrian was now waiting for some DM from Elena. Perhaps, God had settled their relationship in the heavens! Finally, in late 2018, Elena sent a DM to Adrian and thanked him for following her in a decent way. They started chatting occasionally and revealed that they had the same preferences, liking and disliking, and even passion. That was actually the power of the right efforts put by Adrian. He not only followed his crush but also had an eye on the passions and preferences of his crush. This is how Adrian won Elena’s company and friendship. They are in a committed relationship these days. Adrian, occasionally, goes to see her playing in the local Spanish clubs and Elena prefers traveling to join him on the romantic beaches of Latin America.

Note: As Amazon Associates, we may earn from qualifying purchases.